Electronic voting machines that leave no paper trail scare the shit out of me.

I hit up my polling place at 0700 this morning to do my civic duty to tell the local Repubs to fuck off (essentially). I checked in, then wandered into my little touch-screen voting station. I say to the middle aged woman working the election "Do I get to vote against using untracable electronic voting machines in this election?". Strangely enough, she did not laugh.

Governor: Dem
Lt Governor: Dem
Attorney General: Dem
Member, House of Delegates: Dem
Sure, spend money on schools, what do I care. It's only a couple of hundred million.

Easy cheese, right? A monkey could cast a vote (I still don't know what the problem with all those Florida mongoloids was a few years back, but I digress). Anyway, poke, poke, poke, poke, Next. 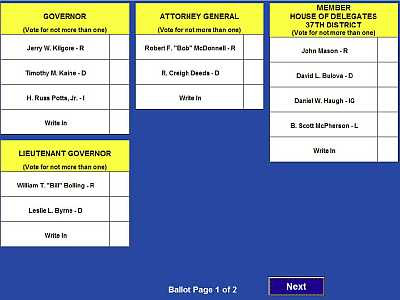 On the following "review your choices" screen, I see that I have (evidently) managed to select a Repub for the House of Delegates job. Hrm. Not a chance. Ok, there's maybe .01% chance that I fat-fingered it and managed to hit the Repub's little box on the ballot screen. But I seriously doubt it. And if .1% of my finger accidentally wandered over to the Repub's box, that leaves 99.9% of my finger hitting the Dem's box. How the hell did that machine think I voted Repub?

It was easy enough to hit the "Back" button, then slowly hit the Dem box for House of Whatchamacallets, then hit "Next" again. But had I not been paying attention, I totally believe that my vote would have been incorrect.
Posted by gmr2048 at 1:31 PM