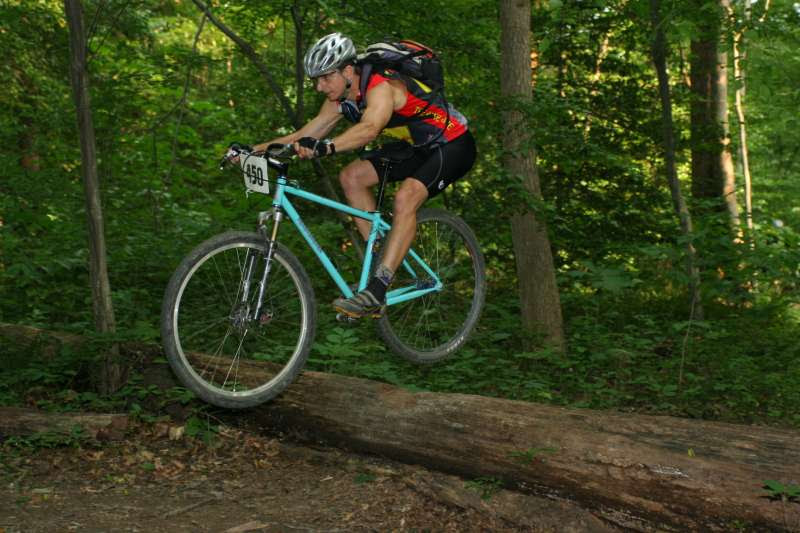 A couple of weeks back, I submitted my second photo (shown above in ultra-crap quality) to the "Rider's Eye" section of Dirt Rag Magazine. By the comments in this thread over on the MORE forum, it sounds like it was published. The rider with the mad skillz is Larry Camp who rides (used to ride?) for local VA bike shop The Bike Lane.

So it ain't National Geographic (or Sports Illustrated, for that matter). But I dig it.


(Edited to add link to the Bike Lane)

1 : a naive remark or action
2 : the quality or state of being naive
3 : the assumption that one can purchase a new gas grill at 7pm, cart it home, assemble it, and be cooking dinner on it *anytime* before midnight.

If you sell two sizes of something (I don't care if we're talking pizza, soda or fat hookers), you sell a SMALL size, and a LARGE size. You do not, by definition, sell a MEDIUM size and a LARGE size. Websters defines that ever confusing term "medium" as:

1 a : something in a middle position b : a middle condition or degree

If you in fact sell two sizes of, oh let's say, soda. And someone orders a "small", you are *not* allowed to reply "We don't sell small, we only sell medium and large. Its ('it' what?) the same price as a small".

How is it, that when I have my annual VA state vehicle safety inspection, my headlights are *always* out of alignment? Every fucking year? I call bullshit. What a scam. My ass hurts. It just had $20 scammed out of it. Bastards. For that to be true, I'd have to be using my truck as a bumper-car on the beltway. And believe me, as much as I'd like to do that...I don't.

While I'm at it, let me just mention that this inspection station (aka 'gas station') also charges $50 to replace a burned out fog light bulb. Fifty fucking dollars?? Are you on herioneexlaxcrackweedx? The bulb sell for $3.95. Scam scammy scam fucks.

DT, I'd suggest you never take your car(s) in to that Shell station by your house. They'll burn you.
Posted by gmr2048 at 3:01 PM Links to this post

After seeing a few too many "Submit your photos to our site for the chance to be famous" sites, I've decided to use this space to point out the subtle nuances of the crappy "Terms of Service" (hereafter "TOS") that go along with many of those offers.

Frequently, in the fine print (that no one ever reads) of news organizations or online photography contests, there will be a line which reads (roughly) "By sending us your photo, you give up all rights to it, and give us rights to do whatever we want with it, including selling it, forever and ever. Amen. Oh, and you get nothing for it in return. Have a nice day.". So in the off, off, *off* chance that you happen to catch that Pulitzer Prize winning moment (it happens occasionally, as with the amateur who snapped the photo of the firefighter holding the child's limp body after the Oklahoma City bombing years ago) and submit it to CNN, you'd have given up almost all rights to the photo.

I'll try to find these crappy Terms of Service and highlight them here. Who knows. Maybe the information will help somebody retain some rights to their property.

First on the list is CNN. The "screw you and your rights" paragraph of their TOS reads:

"By submitting your material, for good and valuable consideration, the sufficiency and receipt of which you hereby acknowledge, you hereby grant to CNN and its affiliates a non-exclusive, perpetual, worldwide license to edit, telecast, rerun, reproduce, use, syndicate, license, print, sublicense, distribute and otherwise exhibit the materials you submit, or any portion thereof, as incorporated in any of their programming or the promotion thereof, in any manner and in any medium or forum, whether now known or hereafter devised, without payment to you or any third party"...

(While specifically targeting photo TOS, it should be mentioned that some crappy TOS cover much more than just photos. For example, today's example, CNN, also applies the TOS to their "Send us your vehicle of the future designs". If you happen to have some revolutionary new idea/design/concept, they're well within their rights to take your idea, sell it to Detroit (or Japan, more than likely), reap the rewards, and leave you wondering why you just gave away the farm.

So people, just watch what you submit and where. It could come back to bite you one day.
Posted by gmr2048 at 1:24 PM Links to this post

(Simply as a convenience. I get no kickbacks from the above links)

Luke Wilson (the non-blond Wilson) is a slacker army guy who gets roped into an experiment to put a person into suspended animation for a year. Things go wrong and he wakes up 500 year later when "Uhh-merica" has gone to shit. The English language has devolved into a mix of ghetto/street/redneck/mumble. The top show on television is now "Ow! My Balls!", in which the main character gets repeatedly whacked in the balls in various ways. Costco is the size of a city (and offers law degrees). Patterns on cloting are nothing more than a mish-mash of dozens of corporate logos. Water has been replaced by a GaitorAid-like green drink ("With electolytes!"). And people have worked sponsorship into their names (i.e. "Dwayne Elizondo Mountain Dew Herbert Camacho"). In the movie, after testing, it's discovered that our hero, the 21th century slacker is now the smartest man in the world.

While the movie is laugh-out-loud funny (in a crude, low-brow kinda way), it's also a little disturbing. You can plainly see that it is exactly where we're heading as a society. It's just a matter of time.

Written/directed by Mike Judge (the man behind the classic "Office Space"), it's easy to see why this movie didn't get much press when it was in theaters. (It was in theaters...wasn't it? I think it actually had about a 2-week run before being swept under the corporate rug). Judge holds back little as he skewers Costco, Carl's Jr., GaitorAid and others.

Highly recommended viewing. Destined to be a cult classic (much as Office Space has become). Rent it, buy it, borrow it. Just see it.

Ok, 31 posts in my Drafts folder, in various states of completeness. I think I'm just gonna start dumping them onto the blog since I've had no time to actually complete them, or come up with new, interesting bits.

Quick summary of where my time has gone:

The wife and I bought a house a couple of weeks back (have I mentioned this before? I forget). We had to fix up some stuff up before we moved in. And we painted (and repainted, and re-repainted) some of the rooms. Then we actually moved. Mostly. There's still crap left at the apartment. A big, heartfelt thanks goes out to everybody who helped out with the move. Sorry we own so much crap. We'll trim down by the next move. I promise.

Cool house bonus: the place came with a DLP projector and an 8' screen painted onto the wall in the basement. I finally got enough pieces of my home theater gear hooked up that we could use it. The ceremonial "first viewing" was the first 30 minutes of Star Wars (the original 1977 version). Like I told a friend, when that Star Destroyer cruises overhead in the opening scenes, I nearly wept. It was magical. Sadly, we didn't have time to watch the whole flick. Later that evening, the first full-movie showing was Serenity (the movie based on the canceled TV show "Firefly"). I also took in "American Hardcore" on the big screen. Pretty good movie about the rise of hardcore punk music in the late 70s and early 80s. Highly recommended. Especially if you're a punk fan. Extra-especially if you're a DC native punk fan. They spent a good deal of time talking to Ian MacKaye from Minor Threat/Fugazi and the guys from Bad Brains.

I managed to get out for a bike ride last week. Did the standard Colt's Neck loop (which is now about 2 miles from my house...yay!). The trails were OK the first five miles, but sloppy the second five. It was like you were riding fixie...you got no rolling momentum. If you stopped pedaling, the wet ground halted your forward progress in a matter of feet. And the tires stayed pretty caked with mud. All in all, not a terribly fun ride. It actually got far less-fun (more un-fun?) right around the time that the bike got washed out from under me during a foot-deep water crossing (damn algae). With daylight fading fast, and air temps in the high 40s, the ride went from "less fun" to "fuck this". I got about 80% wet (literally coming up spitting water out of my mouth). I rode the last mile or two out of the woods to civilization then decided to call in a rescue. The two mile paved ride back to the car, while soaked to the bone, didn't sound appealing. Thanks to my girl for making *yet another* rescue pickup.

Hung out with the new neighbors drinking beer the other night. It's really a relief that all the neighbors seem cool (and drink decent beer, no less!). Nice folks.

Anyway, I'm sure there's more useless stuff to talk about. Tune in next month for the update! (Not really).

My f*cking kingdom for...

While trying to decide from among the 237 different cable TV pricing options and one thing is made painfully clear to me: I'm never going to watch 97% of the dumbass channels they offer. If I could pay on a per-channel basis, my cable TV bill would be about $9/month. A far cry from the $150/month they force upon you if you want any service at all. Bastard monopolies.