I swear to god, if I die riding a bicycle, it will be in a parking lot, f*cking around before a real ride.

The other day, DT and I met for a quick after work ride. I get to the meeting location (parking lot) first and get all my crap together for the ride. DT arrives and starts getting ready. As he's doing that, I'm tooling around on my beater SS (sans helmet, of course. This is a parking lot, why would I ever need a helmet in a parking lot?). Ride up a curb. Ride down a curb. Ride over some gravel. Ride back up a curb. Ride up a tiny incline. Ride back down a curb. Pull up on the front end so I can wheelie drop and land with both wheels at the same time. Stomp too hard on the pedal. Pull up too hard on the bars. End up pulling a wheelie and going all the way over, landing flat on my back on the pavement still clipped into my bike (which is now over top of me). Thankfully, I kept my chin tucked down towards my chest. Otherwise I could very well have cracked the back of my melon on the asphalt, braining myself.

A few years back, the situation is similar. I'm in a parking lot before a ride, waiting for other folks to get ready. It's winter. I decided to ride up onto a mound of snow that had been plowed off of the lot. I ride up to it at speed, pull a wheelie, hit the mound, and come to a dead-stop. I stand there for a bit (minutes? seconds? it feels like a long time), front wheel two feet off the ground on the snow pile, rear wheel on the asphalt. Then slowly fall flat over on to my right side hitting the asphalt. Never even clipped out of the bike. That time (helmeted, thankfully) I managed to bash the shit out of my elbow. An injury which continued to nag me for months after the event.

So, moral of the stories boys and girls? Wear your helmet. Always. Cuz them parking lots are dangerous places. Especially if you're an idiot. Like me.

The National Capitol Area Chapter of the American Red Cross posted a couple of my shots on their homepage. 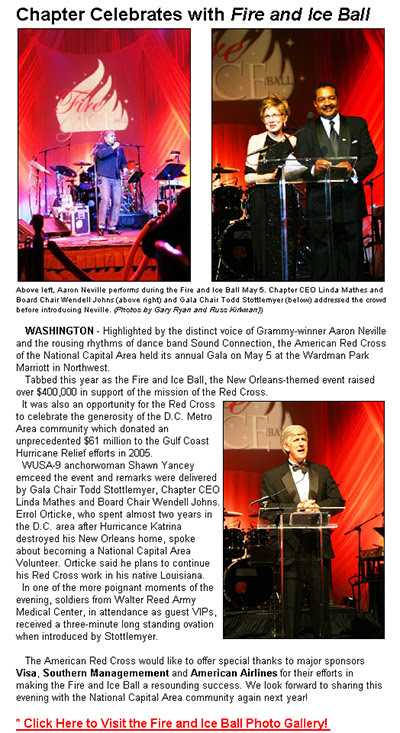 (screen cap of http://redcrossnca.org/)
The two shots on the right are mine. These are shots I took as a volunteer photographer at their Fire & Ice Ball a few weeks ago. They also thought it was a good idea to make every shot I gave them (even the *really* bad ones) available for all to see in their gallery. (Note that there are shots from at least one of the other photographers in the gallery too...possibly more). Nice to see my name up in lights...as it were.

So the mystery of why my last few rides have felt so strong has been solved.

Riding my "old faithful" 26" singlespeed the last few times out, I was making climbs I rarely (if ever) make. It turns out the reason is my gearing. It hadn't occurred to me that the 32x18 gearing on my 26er was an easier gear than the same 32x18 I run on my 29er.

Last summer/fall when I was riding more, I didn't really notice the difference. Probably because I was in somewhat better riding shape. After taking the winter off to get married and house shop and uhh...drink beer and um...watch TeeVee, I notice it now. Last summer/fall, I had been riding my 29er regularly and had gotten used to the tougher gearing. When I picked up my 26er for my recent rides, I was running an easier gear.

I took the 29er out on Tuesday and it felt like I was trying to climb those same seldom-conquered hills with tires mired in oatmeal. Granted, it was the first time I'd ridden on dirt two days in a row in a long time. So that didn't help. But I think the main performance hit(s) was(were) the gearing and the big 29er wheels. The bigger wheels and tires have more weight/mass which require more power to get turning. The added momentum of that weight once it was spinning was nice. But only spins for so long on the climbs.

Special thanks to DT for pointing out the differences in gearing between the 26er and 29er. 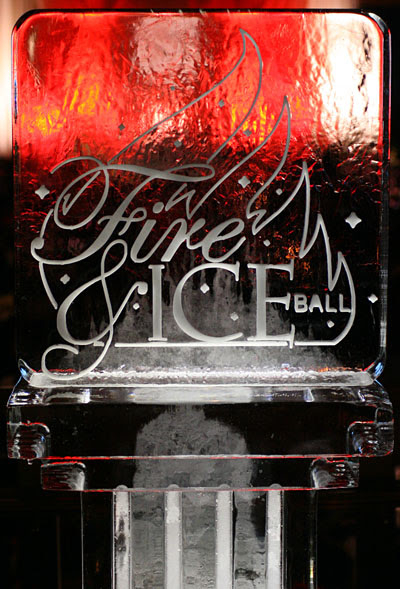 (The shot above is the event ice sculpture. I was trying to capture colors to match the event name ("Fire and Ice Ball"). The red "Fire" at the top are the lights of the stage shining thorough. The white behind the word "Ice" is where the frost on the surface of the sculpture hasn't completely melted away yet.

This past Saturday night was the Fire and Ice Ball, put on by the American Red Cross of the National Capital Area. I managed to weasel my way in...er..."volunteer" as an event photographer. In attendance was former VA Senator George "you know the word" Allen, former MD Lt. Governor Michael Steel, a bunch of wounded soldiers fresh off of the front lines at Walter Reed Army Medical Center, and Aaron Neville providing the evening's entertainment.

Shooting this kind of evening event always *always* proves to me just how good the guys who shoot this kinda stuff for a living *really* are. This stuff is hard. The light is dim. It's constantly changing. Lots of times, there's no clearly defined subject to shoot (how do you shoot a group of people where half of what you're seeing are the backs of heads?). On top of that, there are things that I never thought to consider that totally affect your photos. At one point, I was shooting a small group in a "backstage" room. I snapped off a couple, moved a little, then snapped off a few more. When I reviewed my shots, the two sets had totally different exposures. It turned out that the ceiling height over my head changed by 6" or more between the two sets of shots, affecting my flash's intensity (it was pointed up to bounce off the ceiling). Who thinks to check the ceiling when they're shooting a group of people collected together in front of them for 15 seconds? Not me, I assure you. And that's why the pros are the pros, and I'm still a rank-amateur.

Of the dozen or so shots I snapped in the backstage room, I did manage to get a few that worked. Most are of Aaron Neville and his brother Charles standing next to random people. This one is Aaron, Charles, the vets from Walter Reed, and their significant others. It might be my favorite of the evening...even with it's problems. 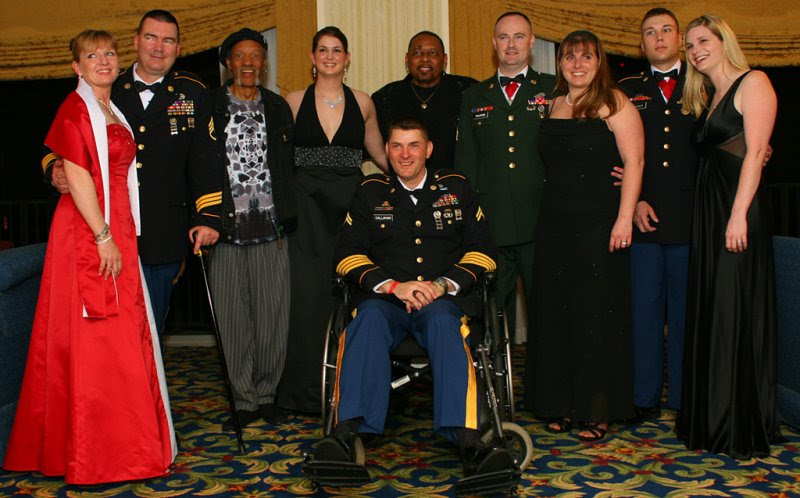 So, a couple of problems exist(ed) with this shot. One: there were a couple of photographers in the room, so the subjects didn't know where to look. For this shot, most were looking at somebody else.

Potentially worse, the soldier on the far left totally blinked the instant I snapped. And the guy on the far right was holding an unsightly water bottle.

So I decided to use my budding (slowly...very slowly) PhotoShop skills to try and make things better. I found another shot where blinky-soldier had his eyes open. I copied them from that image, and pasted them into the final shot. I then spent some time cloning out the water bottle. Finally, I cropped out a bit of the background yuck, and added a bit of sharpening. Here's the original. What do you think? I know, I still have a lot to learn in PS, particularly about how to modify with a delicate hand. 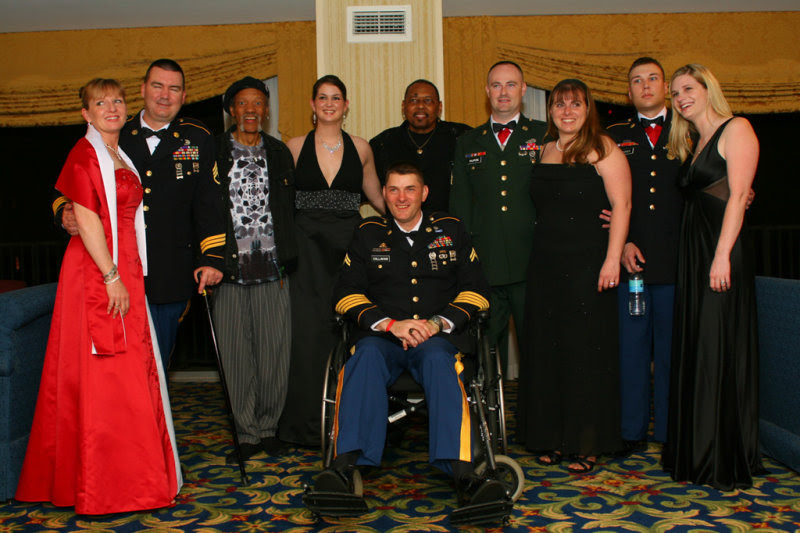 I just took my first quick (7? 8? 10 mile?) spin around my local "Colt's Neck" loop in a few weeks, and I have to say...it was probably the best ride I've had in three years. Maybe "best" isn't the right word, since to me "best" = great ride + great riding buddies + great beer waiting at the end. But it was absolutely my strongest ride in three years. I made climbs with ease that I usually either hike, or struggle to the top of. I pedaled every inch of the 2+ mile paved return path to parking lot, which I usually huff and puff (especially on my SS).

Most interestingly (to me at least) is that for this ride, I had only my "old faithful" beater singlespeed (god, I do love that bike). And I forgot my clip pedals. So I had to do the whole ride on flats. The only two times I had to struggle on climbs were when my foot slipped off the pedal and my momentum evaporated.

At the end of the dirt section of the ride, I got back to the paved path to the parking lot and felt like I'd just done a ride. But I didn't feel exhausted. I was breathing, but not huffing and puffing (like I usually do).

I have no real reason for the lively ride. I definitely haven't been putting in many (*cough* any *cough*) miles on any of my bikes lately. I mean, I didn't set any land speed records on this ride (finishing the loop in about 1:15). But I think I stopped to catch my breath only once or twice. And at that, each was for 2 minutes or less.

Perhaps my last couple of weekends spent watching people who are far better riders than I am running races and having a damn good time doing it gave me a bit of inspiration. Who knows. All I have to say is that if all my rides felt this good, I'd be doing a hell of a lot more of them!

I've been focusing most of my energy on getting the TooFatToRace blog off the ground, so things around here have stagnated a bit. My apologies for that.

I just popped in to say that I posted my Greenbrier MTB race photos over on my pbase gallery. I figured I'd mention it here in case there were some interested folks reading only this blog and not TooFat.

This weekend is the American Red Cross gala, at which I get to play papparatzi (or however the hell you spell that). Also this weekend is the 12 Hours of Lodi race that I hope to shoot too. For both occasions I built a homebrew battery pack for one of my flashes. Cool stuff. And it hasn't blown up in my face yet or anything.


Edit: had to recrop photo to perform a giant-elbow-ectomy. Why didn't I notice that thing in the first place? Eesh.