I guess if you gotta check out, doing what you love while snorkling the Great Barrier Reef in Australia is an OK way to go.

I was never a huge fan, but if I was bored lying on the couch on a rainy Saturday afternoon and I happened across "The Crocodile Hunter", I'd watch for a bit. He definitely did a lot for the conservation movement, and his help in that field will be greatly missed, I fear.

The Crocodile Hunter was the second (as far as I know) of the "Hey, there's something creepy and slimy in that dark hole in the rock-face, I'm gonna jam my arm in there and pull whatever it is out!" naturalists, and I like that (as, obviously, did a great many fans around the world). It was much more interesting to me than the "We're sitting in our Land Rover with our cameras and 800mm zoom lenses shooting video of a lion a mile away taking down a zebra" style.

The first and foremost "creepy thing in the hole...let's grab it" naturalists was (is?) the great Aussie Harry Butler. Harry hosted a show in the 70s called "In the Wild with Harry Butler". I caught it two decades later in re-runs, but it hadn't lost any of it's charm. Harry looked like an outback hermit, 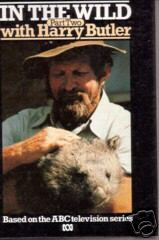 and he would do the creepiest shit (for example, swim in a water hole with a bigass croc and a decomposing kangaroo corpse...cuz it was the only water for 100 miles, and he was hot). Since the first day I had internet access, I've searched for tidbits of info on Harry and "In the Wild" with no luck (literally, zero results). It's probably been a year or two since I last looked, and in looking again, it's nice to see there is a bit more info on him now (thanks to Wikipedia and everything2). There was an entry on Harry on Wikipedia, but nothing for "In The Wild" specifically, so I created a brief blurb. Hopefully I, or someone else, will be able to flesh [thanks Ben] out the article in the future.

Anyway. I've gotten off-topic. The point of this post was mainly to say "Farewell, Steve". Your acting was a bit over-the-top, but your contributions to the conservation movement will be missed.