I managed to get away to Blackwater National Wildlife Refuge just south of Cambridge, MD this past weekend. First time there since last October. I really dig that place. Since it was my first time out there in a long while, I decided to mini-splurge and rent a $1300 Canon 100-400mm "L" lens. Wish I could have *really* splurged and bought that *ucker!

Being winter, there wasn't a whole lot of activity, but I did manage to get a few shots of the locals (click on the images below to see the full-sized version):

This bald eagle took off from his perch on the top branch and came straight towards me...

...before looping around and giving me a couple of nice fly-bys. (Interesting to note the different intensity of the blue sky. These shots were taken seconds apart, but at different angles to the sun. I'm guessing that's why one is blue-blue and the other is washed-out-blue.

On the other side of the refuge I found this juvenile bald eagle hanging out in the tree.

And this endangered Delmarva Fox Squirrel with a mouth full of leaves for the nest (s)he was building.

Yet another eagle flyby.

In what was to be the second worst missed opportunity of the weekend, I nearly caught this eagle in an aptly-named "Klingon Bird of Prey" pose. If only the focus would have locked (operator error). 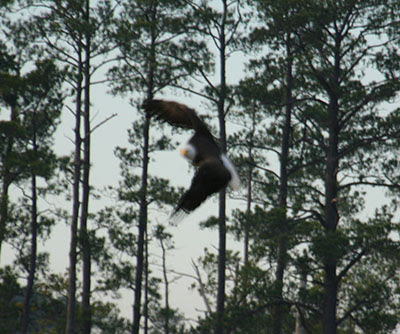 However, by far the worst missed opportunity of the weekend came Sunday morning. I got to the refuge late (about 8:30am) and took a drive through. Not seeing much going on, I decided to roam the MD countryside for a while. When I returned, Wildlife Drive (the main loop through the refuge) was closed. I went to the visitor's center to ask why. Turns out there was an injured bald eagle in the refuge, and the head ranger and a vet were going to try and capture it so they could take it to an eagle rehab facility. I asked if there was any way she (the woman I was talking to...who was wearing a ranger outfit) could get me in to the refuge to act as an official photographer for them. I told her it could make a really cool PR piece for the refuge. I said I'd stay well out of the way, and I'd do whatever the ranger said to. I also offered them full rights to any shots I got. She thought it sounded like a good idea, and called the head ranger on his cell phone to ask if it wold be possible. Unfortunately, the overly-litigious society did me in. He said that due to "liability reasons", it wouldn't be possible. I told him (through her) that I promised I wasn't one of those idiots who sued other people when I did dumb things and hurt myself (and I'd told my family to behave the same way if I managed to kill myself). And I offered to sign anything they put in front of me as a permission slip/waiver of liability/whatever. Sadly, he wouldn't budge. He said "maybe if I'd have been a volunteer". So I asked where to sign up. Roadblocked again...the woman who handles the volunteer sign-ups worked Monday through Friday. Damn!

So, instead of hanging around the visitor's center for an unknown amount of time, I decided to drive out to the far side of the refuge and see what I could find (which is where I got the juvenile bald eagle seen above). A decent shot, but not nearly as cool as what could have been.

Needless to say, I have the volunteer information open in a web browser as I type. The next time I'm at the refuge and there's an injured bald eagle rescue going on, I'll be set!
Posted by gmr2048 at 7:01 PM