To watch, or not to watch. That is the question.

It's like a train wreck. You don't really want to watch, but somewhere, something inside you, on some primal...even guttural level...needs to.

A friend pointed out this BoingBoing post, which references a video called "Two Girls, One Cup". Actually, it doesn't reference it so much as it warns you -on the future wellbeing of your eternal soul- against watching it. With an anti-endorsement like that, how can anybody *not* watch it?

Now, I'm a relatively macabre guy. I'm OK with gross stuff. I was reading books on epidemiology and disease science (Ebola is still a favorite subject), forensic pathology and forensic anthropology well before it was vogue (and before there were 37 CSIs to choose from every night of the week). Back in the pre-internet days, I watched at least one of the "Faces of Death" video tapes (see, I told you it was "way back"). A bit more recently (tho still at the dawn of the modern internet), I spent my fair share of time on rotten.com website and the alt.binaries.grotesque newsgroup looking at all kinds of horrific photos of all kinds of horrific events. I've seen herring inserted in places herring have no business being. So, by now, I'm not too freaked out by gross stuff. Jaded, if you will. 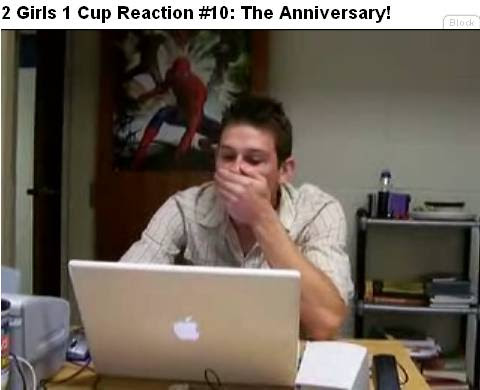 Some clever and creative soul has posted a ton of "Two girls, One Cup reaction videos" on YouTube. These are safe to watch (and quite funny), as they show first-time "Cup" viewers watching the video...they don't show the video itself. Occasionally the viewers do mention what they're seeing on the screen. And it ain't pretty.

Watching these other "Cup" virgins react gives me more than a little pause.

For those brave enough to even read a description of the "Cup" video (and be warned, I've heard the description is enough to give you nightmares), one can be found here.

If you're not as brave, for a laugh you can check the reaction videos #10 and #9. Both are quite funny (and mostly harmless).

At the moment, I'm leaning towards not watching the original. Maybe I'm going soft in my old age.