When can we start prosecuting news organizations for inciting murder? I mean, seriously. When Midwestern corn-fed fucktards go on killing sprees in malls, and leave suicide notes which explicitly say "Now I'll be famous", how about you news organizations *not* fulfill their murderous dying wishes, huh? I mean, goddamn. This isn't rocket science here. 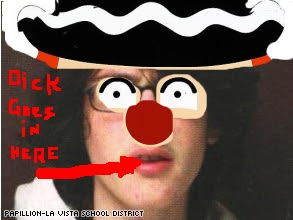 "Police have identified the gunman as Munchie McButtbutt of Bellvue, Nebraska, who had a long history of inappropriate relations with male barnyard animals". Blahblahblah story continues...we're the best news organization on the planet, so buy advertising with us blahblahblah...

There, now everybody knows you have a photo of the fucktard. And you probably know his real name. And the upside to this is that Mr. McButtbutt doesn't get any free publicity, and looks like the asshat that he is for his 15 minutes of fame, so maybe...*just maybe* the next shaggy-haired Midwestern corn-fed fucktard who wants to "be famous" by killing off a bunch of shoppers will think twice about looking like a dumbass and will just off himself in his parent's basement without bothering anybody else.

Or maybe we just use the new and improved "LOLcat bulider" to LOLcat-ize the killers and make a mockery of them (and their bad grammar skillz): 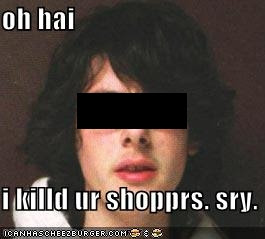