Get Out the Pano

Left for the polls this morning around 5:40am. Got there by 5:45 and was at least 100 people deep in the L-Z line. The A-K line was just as long. Once the polls opened at 6am it was about a 45 minute journey through voting land.

The only strangeness came when a woman who voted before me came out saying "You guys might want to use the touchscreen voting machines. The optical reader is having problems and they* were telling people to leave their ballots and they* would enter them later". Er. Wha? No thanks. As unreliable and paper-trail-less as they are, I opted for the touchscreen. After I had made it in the door, I saw only one woman attempt to use the optical scanner, and it took her three attempts at feeding the paper before the machine finally accepted it.

I shot a couple of snapshots while waiting in line at 0-dark-30. Click the images for biggerer versions: 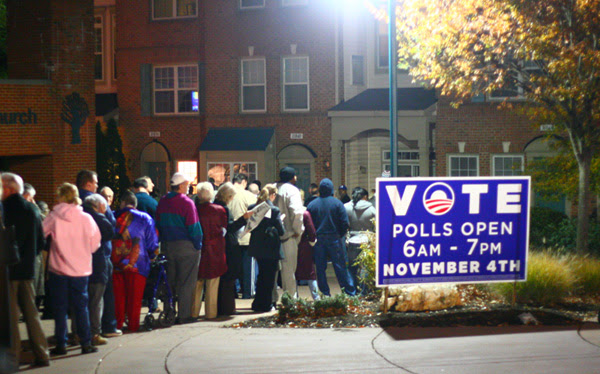 and a 5-shot pano of the line out front that I snapped after finishing my civic duty: