I just stumbled across the Ricoh Caplio Pro G3 (note, that is four separate links, for those of you with too much free time). 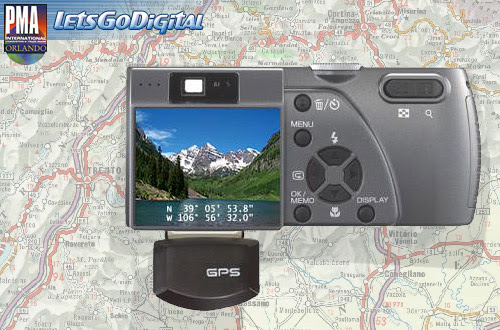 (Photo linked from LetsGoDigital.org. I'm not sure of the etiquette on linking images, so I hope they don't mind)

Basically, it is a new camera (apparently unveiled at the 2005 PMA trade show) that embeds GPS data into photos via it's onboard GPS unit, or an external GPS device, much the way other cameras imbed time/date info onto photos. It doesn't appear to be on the market yet, but hopefully will end up there. I think by the time things are shown at PMA, they're destined to be real products and not vaporware. In my humble opinion, the one thing that could make this camera even cooler would be to make it waterproof. That would make it a "must have" gadget in my book.

This is either so new, none of the usual nerd/gadget/camera sites have it yet, so old that they have already had it and archived it (and I missed it entirely), or so uninteresting nobody cared enough to point it out. I'm hoping for door #1, but I'd settle for door #2.

Is this interesting to anyone in the world besides me? Perhaps. Being both a Camera Nerd, and a GPS Nerd of the First Order[tm], I'm pretty impressed. And since this is my blog, you suckers...er...gentle readers will just have to suffer through it. Muhahahaha!

(Edit to change "gentile" to "gentle" as not to offend my throngs of non-Jewish readers. Thanks for the correction, Ben! Thanks for nothing, spell check!)