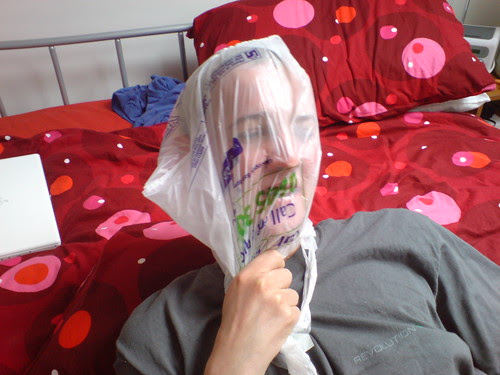 Yesterday I had shoved down my throat (figuratively), another shining example of why we, as a society, are doomed:

After reading this Salon.com article (via BoingBoing) on how plastic grocery bags are procreating at a rate which will allow them to be the dominant life-force on the planet in about 3 weeks, I've developed a solid aversion to them. If given the choice between paper and plastic, my response used to be "eh, whatever". Now, it's a hearty "paper, you planet-killing bastard". For years, I've hauled bags stuffed full of bags back to local grocery stores to be recycled. Recently, I was pretty happy to learn that Whole Foods is phasing out plastic bags entirely. You get paper, or their reusable cloth sacks. Being the Earth friendly hippies the wife and I are, we bought two or three.

So yesterday I go to [national drug store chain] and pick up a few things. They, being not-so-progressive as Whole Foods have phased out paper bags eons back, so I'm left with little choice. I get plastic. I then wander to the far end of the mini-mall and pop into Michael's-We-Shit-On-Your-Planet-Craft-Store. I pick up a single, small picture frame. When I get to the checkout, the girl stuffs it into its very own Michael's plastic bag. I say "You know what...I don't even need a bag, I'll just stick in in my bag from [national drug store chain]", which I do. So friendly I-Hate-The-Earth checkout girl grabs the abandoned brand-new plastic bag and shoves it into the trash can next to her. If I'd have just accepted it, at least it would have ended up in plastic-bag-recycling-heaven, and not landfill-hell.

Some people just *don't* get it.