With the demise of my last "new steed", I'd been on the lookout for a new bike to fixie-up as a one-geared-wonder road machine. A couple of weeks back, a candidate presented itself to me for consideration. A guy who sells old-ass bikes both on Craigslist and at a couple of local flea markets advertised a "ridiculously large" (~67cm), circa 1980 Schwinn Traveler road bike.

I told him that being ridiculously large myself (~195cm), this sounded right up my alley. I met him at one of his usual haunts and gave the bike a test spin. It rode quite smoothly. There were a number of oddly-colored painted touch-ups on the frame, but it seemed solid (hopefully). I managed to talk him down from his asking price by telling him he could have pretty much everything off of it, aside from the frame, fork and cranks. Less crap for the crap pile in my basement, and more crap for him
to fix up other long-in-the-tooth rides in his inventory.

I hauled her home, stripped off the remaining useless bits, cobbled together enough useful bits from fixies past and rebuilt her: 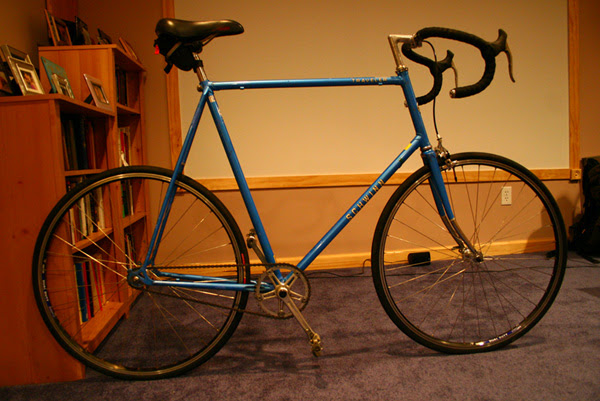 My initial test ride was last weekend. My kid had a lacrosse game ~8 miles away, practically on the local bike path. It was an agonizingly windy ride out (but the ride back was a breeze!). A few times, I literally had to stand up and pedal on a flat section of path cuz the headwind was so brutal. While the gearing on this build was the same as on my Sekai (42x15, 170mm crank), it seemed much more difficult. During the wind-tunnel portion of the ride, I decided that when I got home, I'd re-tool the Schwinn and make it 40x15 (since I happened to have a 180mm crank set w/ 40t ring lying around the crap pile).

My initial test ride with the new and improved 40x15 gearing was today. This time, the kid had lacrosse tryouts (for a different league) out in Leesburg, at a location again easily accessed by the local bike path. Being generally outta shape and on a test-ride, I decided to drive about half way out and ride the rest of the way (~7mi each way). The gearing was noticeably more spinny, but seemed more comfortable for my a fore mentioned outta-shape azz. (The lack of wind didn't hurt matters either.) Sadly, while I had no trouble finding the town of Leesburg in general, finding the specific school at which tryouts were being held proved more challenging. After tooling around the streets of old-town Leesburg for a couple of miles, I decided to throw in the towel and head home. Test-ride mission accomplished, meet-up-with-the-kid mission a total failure. Upon closer inspection (once arriving home), there apparently are not enough streets named "Catoctin Circle" in this world, as Leesburg decided it needed two. The correct one about a mile further out than the other (incorrect) one. SE? SW? Really, what are you...DC? You need NWs and SEs?? No, I didn't think so.

After the ride, I was hungry and looking for something different. Decided it was time to give Phở a try. Used the phone and Google Maps to find a local Phở joint and told them I was a total phở noob. They suggested the "starter phở", which included eye of round, flank and chicken (I think), but thankfully left out the fatty brisket, tendons and tripe. Downed about half of the as-big-as-my-head sized bowl before I noticed the bottle of hot sauce (rooster sauce?) on the table. After sampling trace amounts and deciding it was OK, I added a significant number of dashes to my soup which took it from "Eh, it's pretty tasty" to "Holy crap, this is good!!". This might be my new favorite post-winter-ride meal. The rooster sauce gives you the sweats in places you never even imagined you had sweat glands.