A couple of Sundays back, I had the opportunity to explore some new trails. My oldest kid had an all-day lacrosse clinic at the College of William and Mary in Williamsburg, VA. I took the opportunity to scope out some local trails. 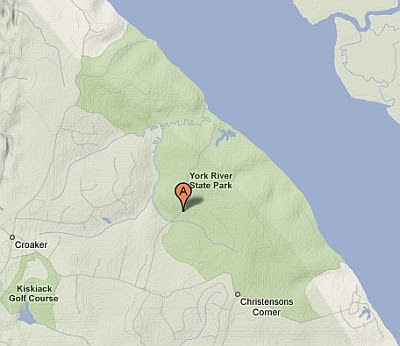 After dropping the kid off at W&M, I had a few hours to myself. Area trail reviews tended to favor the Marl Ravine Trail at York River State Park, so that's where I headed. After finding the park and asking a local rider where the trailhead was, I suited up in cool weather gear, mounted the (still-fixed) Monkey and pedaled off into the unknown.

The trail was fast, fun and a hell of a workout (particularly for my non-ridin'-ass). The terrain was what you would expect if Fountainhead and Rosaryville got together, got bizzy and made a baby trail. Flowy, but not as flowy as R'ville. Lotsa quick up and down hills, but not as grueling as F'head. Total distance is anywhere from 6 to 7 to 9 to 14 miles, depending on who you believe. The trailhead says 5.8, I think, but the paper map available at the park entrance seems to say 9.1. I've ridden my local ~7 mile loop fixed a few times, and the Marl Ravine *definitely* felt longer. Probably didn't help that there was a ~1.5 mile ride from parking lot to trailhead. I definitely felt that at the end of the loop. I also took the opportunity mid-ride to take a break in the woods and just soak up the total silence. A rare item you don't find at many local trail systems.

I had planned on posting a GPS track of the trail. I meant to pack the GPS in the backpack, but managed to leave it safe and sound in the truck instead. So no waypoints for you.

Props to the Eastern Virginia Mountainbike Association for building and maintaining the trail system there. Apparently, they had been out cutting new trail as recently as the day before my ride. Well done! One request, tho: When you get to the one and only intersection with the vague marking "Raccoon Run --->" and "<--- Bluejay Jump", how about an idea what one is getting one's self into. I was actually looking for the longer route and decided on the "Raccoon Run" option, since it seemed to be more in-line with the trail and flowed more naturally than the other. But I have no idea if that was better/worse/shorter/longer than the other cleverly named path.

The entire endeavor took just about two hours (including gearing up before and gearing back into street-clothes after). Afterward, with time running tight, I tried finding a local pub for a beer and burger, but came up empty. I sadly had to settle for an Appleby's (Applebees? Whatever.) for a mediocre brew and uninteresting burger. Following that, I picked up the kid and took off north-bound on the leisurely three-hour drive home...in traffic.