I was lucky enough to be in SF at the time of the SF bay area VeloSwap hosted (maybe sponsored) by the San Francisco Bicycle Coalition. VeloSwap is part bike yard sale, part bike industry showcase, and part bike geek hangout. It was fabulous! Thousands of bits and pieces and parts from brake lever hoods (10 for $1) up to a brand-new Specialized Demo9 downhill bike. Fun for the whole family.

So anyway, off in one corner of the Cow Palace was an area set up with a bunch of stationary trainers, a bunch of bikes, a laptop, and a bigass screen. Evidently a race was scheduled. A race based on the terrain of a particular trail of Mount Tam (arguabley the birthplace of mountain biking). The participants of the race were just settling onto the bikes as I arrived, and the first person I noticed was Gary Fisher... 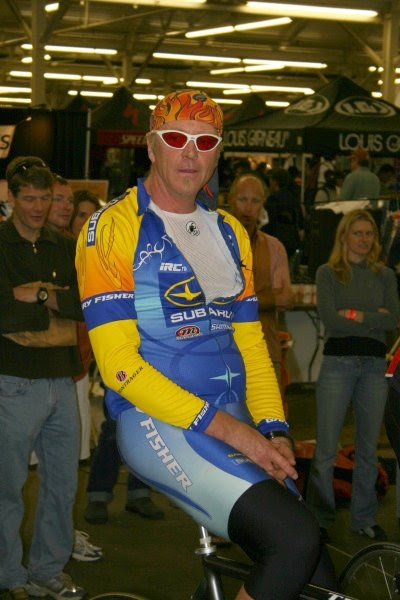 ...of Fisher Bikes fame (and arguably, one of the "inventors" of mountain biking). I'm a bit of a fanboy, since I ride two Fisher bikes: a 2002ish Sugar 2, and an old 2000 Aquila that I converted into my singlespeed, so needless to say, I was pretty stoked. Also, being the photogeek that I have lately become, I had my trusty 20D on me, so I whip it out and start shoting. 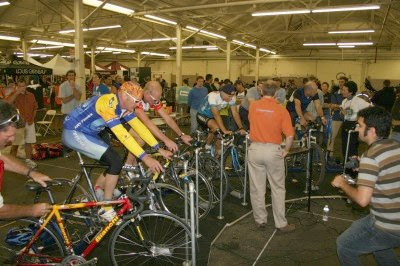 As I look around, I see other "racers" who look familiar. Later, after the show, I find a flyer which lists the race participants as:

I must have fired off 200 shots in the 10 minutes I was standing there (luckily, I wasn't alone...there were plenty of other people taking pix too). Most of my shots were aimed at Fisher, but I did manage to get in a few of the other racers as well. I believe the rider in Specialized gear next to Fisher is Mike Sinyard (founder and current president of Specialized). 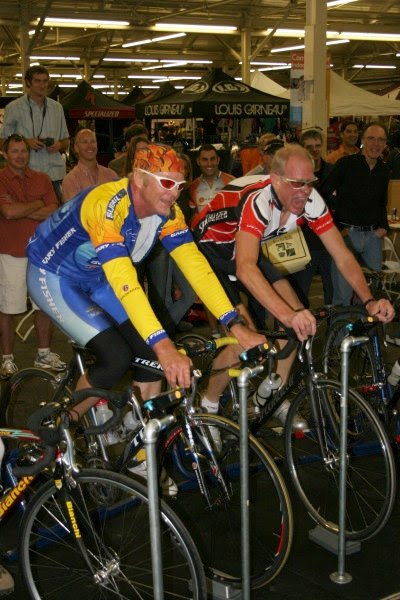 I only now realize, while Googling to figure out who these people were, how much history was sitting 10' in front of me. If I'd have known then that everyone there was a pioneer in mountain biking, I'd have spent more time panning my camera around.
Posted by gmr2048 at 1:04 PM