I have a strange love/hate relationship with advertisers, their product, their methods, and the innovative ways they find to feed us consumers the idea that we can't live without their wares. There are some aspects of advertising that fascinate me. I have no idea why. I don't particularly *like* advertising. Matter of fact, I downright *dislike* most of it. I prefer TV shows commercial-free on DVD, and the FFW button on my DVR gets a workout constantly. I *hate* stupid TV commercials (which, sadly, is about 99.95% of them). They seem aimed at the least-bright 1% of us. And commercials played in front of movies in the theater make my head explode. I mean, seriously, if they were subsidizing my ticket prices, then maybe, *just maybe*. But with ticket prices in my town over $10 each now, they ain't subsidizing shit besides the theater's coffers.

However, product placement in movies is one area that interests me. The idea that nearly everything we see in a movie has been paid for I find fascinating. I love when it's done well. Movies for me occasionally become a "Where's Waldo" game of finding random products in a scene. I would love to know what it costs to have that pen lying on the desk, on camera for no more than five seconds, be a Bic pen as opposed to any other type of pen. However, when it's done ham-handedly, like the scene in the toy shop in "Jurassic Park", or the entire movie "I, Robot", I think it's an abomination.

I also usually dig "Hey, I didn't even know that was an ad!" advertising. I was not terribly impressed with the TV show "Lost"'s attempt at innovative advertising. It was interesting for a minute, then annoying.

Which brings me (in a roundabout way) to the latest issue of Outdoor Photographer magazine. It arrived in the mail a few weeks back. Like so many other OP issues, and indeed countless other photography mags in general, it had a nice background image, overlaid with a "new and improved" product of some variety. I gave the cover a quick once-over...blah blah blah Epson makes a new well-reviewed printer that I can't afford, yeah yeah, nothing new there... 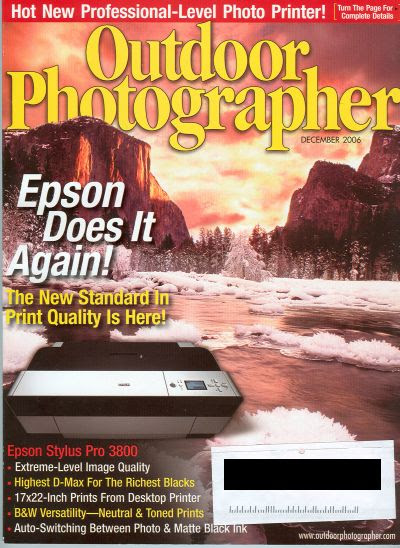 Then I turned to page two: 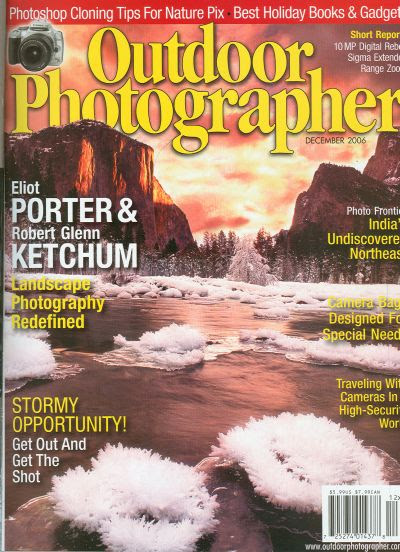 where the enormity of the advertising ruse was revealed.

I can't imagine the balls it takes

1)for a marketing goon...er...rep to present that to the editors

2)for the editors to actually go along with it!

I mean, seriously? To sell out your cover. 100%. Totally? Front and back heavy stock glossy paper cover. Sold to the highest bidder (this month, Epson!). Man, I wish there were some kind of footnote to tell us what that cost Epson.