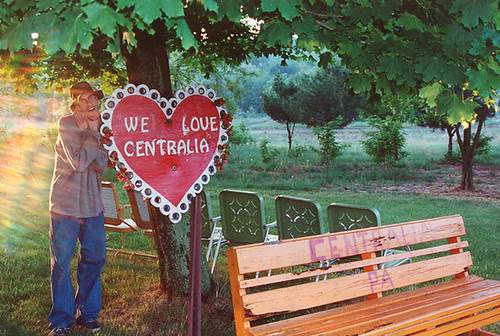 Centralia is a former coal mining town in central PA. In 1962, a fire set to "clean up" the local dump spread underground to old, abandoned, played-out coal shafts beneath the town. The fire has been burning ever since (nearly 46 years, in case you don't feel like doing the math). In the '80s government bought out most of the residents. A few chose to stay despite the dangers of the unstable ground (sinkholes) and high levels of carbon monoxide produced by the flames. Today, the town is now mostly abandoned. The ground is warm to the touch, and smoke rises from cracks and crevices. Just feet below the surface, temperatures reach nearly 200°F (photo by somebody else).

I put a few photos of the town up on Flickr. These photos were taken probably 5 years ago when a group of offroading friends and I ventured to the town. They were shot with my old Canon EOS Rebel IX (APS baby!) film camera, then scanned in and slightly fixed-up in PS.

My family hails from two towns near Centralia: my grandfather was from Mount Carmel and my grandmother from West Hazleton. Had I known Centralia existed in my younger days, it would have made trips back home *much* more interesting. I plan to go back up there with my DSLR one of these days soon and take more artsy photos. These photos were taken more as simple snapshots, with little regard paid to aesthetic.

Anybody up for a road trip?