Last weekend I drove out to Blackwater National Wildlife Refuge to take some photos. I had to drop the wife off at BWI early Saturday (which is about half way to the Refuge) so I figured after making my drop I'd drive out to Blackwater, shoot till sunset, then find a hotel room for the night. Sunday, I would get up before the sun, get to Blackwater to shoot sunrise, and continue shooting the rest of the day till I had to head back at BWI to retrieve the wife.

The best-laid plans of mice and men etc, etc, etc...

I got to the refuge mid-morning and there was *nothing* going on. A couple of osprey were about, but keeping 100-200 yards offshore (perhaps more). Even with my fancy rented 300mm f/4 IS lens they were too far off to be interesting. I saw an eagle or two, but they were pretty reclusive as well. Apparently a couple of the breeding pairs that hang out on the refuge were nesting and/or rearing newly hatched chicks. So all in all, the place was dead, photographically. I tried finding other stuff to shoot, but with everything there being dormant-tree-brown or still-water-brown, I was at a loss. I hung around till 4:30pm, when the clouds started rolling in. The first few drops of rain were enough to send me packing. I decided to cut my losses and head for home. No sense springing $100 for a hotel when there'd likely only be the same animal-free brown-on-brown pallet to shoot the next day.

I took maybe 30 photos the whole day. The only shot worth keeping was of a squirrel. Yeah, I know. It was one of those endangered Delmarva Fox Squirrels and all. But still, a fuckin' squirrel. 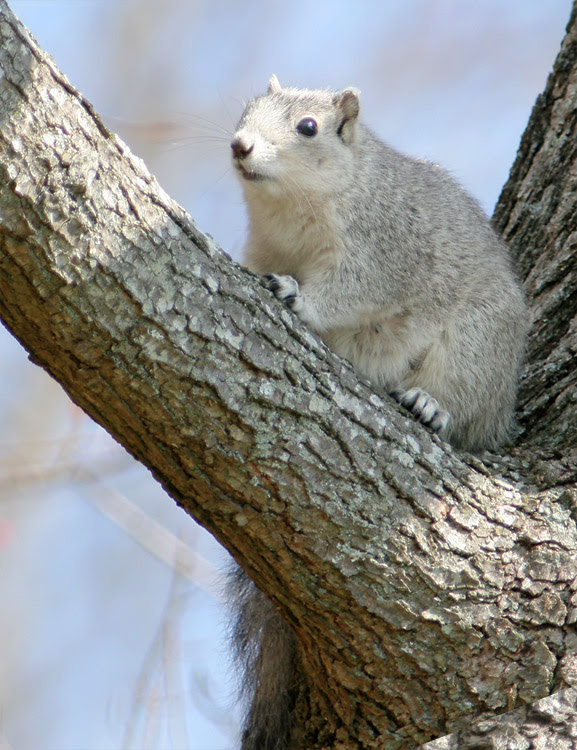