Met up with DT and Lee (and another guy who's name I forget) last night to do a ride around the Colt's Neck loop. Left from the Reston ice rink, wound our way around a bigass loop passing through parts of Lake Fairfax park and following the CCT trail, then ended up at the W&OD. Then we spun the last couple of miles back to the parking lot. Finished the ride in a little over an hour (my fastest time doing the loop, I think). It turns out the ride is just about 10 miles, not the 7 miles I thought it was.

This is the same loop we rode last week with the GPS tracking us. I took the waypoints and imported them into the coolest GPS/mapping program in the whole world...Quakemap. I then took 13 screen captures of Quakemap screens, pasted them as individual layers in Gimp and made them into a bigass map of the ride. The original file is over 3MB, so here's a super shrunken down/compressed (and recompressed) version: 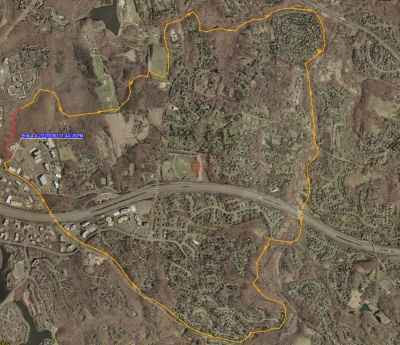 For scale, the grey, wavy line that runs from east to west at about the middle of the image is the Dulles Toll Road. An 8 lane highway.

If you're interested in the full size version, email me and I'll send you a copy. The full sized image follows the trail closley. I cut out a lot of the woodsy stuff in the middle of the image, to save on size and processing time. (When processing the original 13 layer image in Gimp, I was using something over 360MB of RAM).