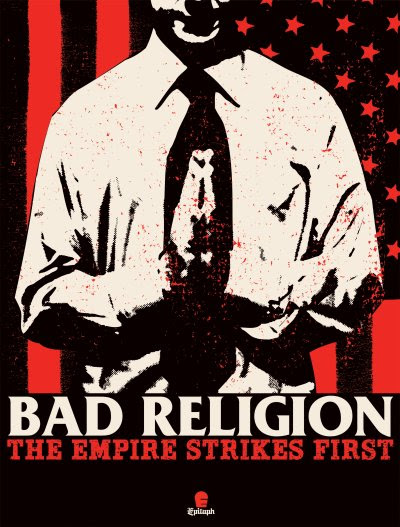 What an incredibly cool night! 10/26/04 Bad Religion played a sold-out show at the 930 club here in DC, and I have to say it was one of the best, most energetic shows I've seen in years. Years! I had been waiting to catch them live for a couple of years, ever since "discovering" them (12 years into their career, but who's counting?), and it was worth every minute. This show rivaled some of the early Jane's Addiction shows I saw in the early 90s..before the frat-boys discovered them and f*cked up the program.

The evening started up with me meeting at DT's house and then heading down to Arlington to meet another friend of his, Kris (with a "K"). We met and hung out at Whitlows for a couple of beers and then hit the road, headed for DC, Kris in his car, me and DT in the DTmobile. It didn't occur to us till a little later that neither DT or I really knew exactly where the 930 was. I mean, we had both been there, and had a general idea that it was U or V street, somewhere around 14th (turns out it's actually closer to 7th). Not at all like the good old days when you could find the 930 Club at 930 F Street, NW.

So we took in the sights around the U street corridore for a bit, till I decided to suck it up and call 411. Minutes later we had the address and finally had a destination to shoot for. Minutes after that, we arrived. Factor in a quick restroom break in an alley, and we were off to the door to re-group.

I was supposed to be meeting Ben and a group of his friends at the club, but we arrived fashionably late (as usual), so they had long since gone inside. In we went, and headed straight upstairs to grab a couple more beers from a bartender Kris knew.

It turns out we had missed the opening act, Rise Against, alltogether. I was kinda hoping to catch them, cuz anybody touring with Bad Religion can't be all bad. Guess I'll have to scrounge around for some MP3s and see what they're like. Anyway, Bad Religion takes the stage and we're still up in the balcony. We hang there for a little finishing our drinks when I just have to go get in the shit, as it were. I'm 34 years old. I can't remember the last time I was in a pit. I've been to a ton of shows that just didn't inspire me to get into it. This one did. I had to be down in the pool. So DT says he's all for it, while Kris decides to hang back. DT and I finish our beers and head down. Bad Religion is into their third song by this point.

We hit the first floor and gently (heh) push through the crowd to the pit area and dive right in (well, not 'dive' so much as walk in). We pretty much stay there the rest of the show. A couple of songs into our stay in the pit, Ben finds us and the three of us along with 30 of our closest, shirless, sweaty friends mix things up.

I gotta say, I don't know what I was thinking taking my old-ass into the pit. It was a blast, but man...I'm not in shape for that anymore. There was one moment of relief when some thoughtful person (from the balcony?) tossed a full drink cup that hit me flat on top of my head. It was quite cold and refreshing until the vodka ran into my eyes. Ouch. Thanks, ass. In spite of the vodka-rain, it was a really great pit. Aggressive (and I have the scuffs, bumps, and bruises to prove it) but not many assholes. There were one or two idiots in there just throwing punches, but most people were just flailing around having a good time. When people fall to the floor, almost instantly they would be helped back to their feet.

So we managed to survive about an hour and a half (wild estimate) in the pit before the show ended. We said our goodbys to Ben and his group and DT and I headed back to his place (where I was parked). Throw in a short detour for some Wendy's burgers (ugh...at 1:30 in the morning) and that about sums up the day.

I may need to start hitting more shows...and more pits. It brings back memories of days gone by. Us old f*ckers like that kinda stuff ;)
Posted by gmr2048 at 4:21 PM