Had you asked me yesterday if anybody in my neighborhood was cool enough to know who Bad Religion was, I'd have said "no".

Evidently, I'd have been wrong: 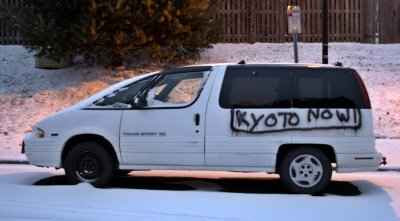 Bad Religion's "Kyoto Now" lyrics from the CD The Process of Belief.

I guess the vandalizer could have been talking about the "Kyoto Now" campaign, but I prefer to think there's at least one hip person in the area. Even if they are a vandal. Still, I can't figure out why that van was targeted. They don't have any right-wing/pro Bush stickers on it or anything.
Posted by gmr2048 at 6:29 PM