Up early Sunday morning to try my hand photographing birds at Dyke Marsh in Alexandria (see also the Friends of Dyke Marsh site). It amazes me how in this area we manage to cram a "wildlife sanctuary" on a narrow strip of land, between a 4 lane highway and a river, but I digress.

Got to the park with only a general idea of where the trial was so I had to wander a bit. Eventually found the path and headed off along the river. about a mile into the walk (not having seen anything interesting) I met a woman who was out birding. We talked for a minute and she told me about an adult Bald Eagle sitting in a tree, further down the path. She was actually able to point it out to me since the path curved around on itself. Cool! That's something I don't get to shoot every day. I thanked her and headed off down the trail at a faster pace, wanting to get to the bird before he decided to leave.

I was able to keep an eye on him as I walked, tho he was too far away to shoot (damn...where's that 1200mm lens* when I need it? . When I finally rounded the last corner, it was amazing. About 100 yards away, across a marshy part of the river was the Eagle, maybe 60' up in a tree...practically posing. Well within range of my crappy 300mm lens.

He didn't look like he was the least bit concernd with my presence. Good. The camera was mounted on my tripod, which i carried bazooka style over my shoulder. I quietly approached the edge of the marsh and set the tripod down. I look up, ready to frame my shot: 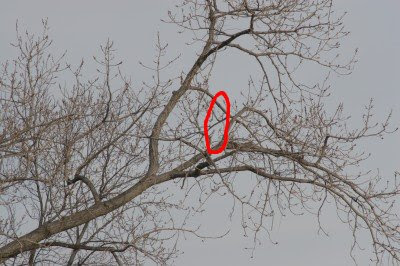 Notice anything missing? Yeah, you got it. An Eagle. As I set my tripod down and took my eyes off of him for 1/10th of a second, he split. I caught a glimpse of him soaring majestically off over the river, but since my camera was locked to my tripod, I wasn't even able to get a picture of that. Dumbass bird. So I stood around in 34* temps for another hour, hoping he'd return with a clawful of fish. But he never showed.

I ended up heading home having shot exactly one photo (seen above). Oh well. 0 for 1 on the day. Maybe the Chinese New Year celebration in DC later in the day would prove more fruitful...