Xmas is officially over. Saturday I got my last hold-out present. It was from the girl, her dad (in a roundabout way) and the US Government. I got a fancy new Sigma 70-200mm zoom lens. It's light-years above my existing el-cheapo zoom. I had been debating and considering and reading about and comparing the lens for a couple of weeks. Saturday came, and I made my desision to get it. A quick trip to Rockville (the lens was lightly used and posted on CraigsList) an exchange of a couple of bucks, and she's mine.

To celebrate the new addition, the girl and I decided to head to the Eastern Shore for a mini, one-nighter vacation. There's a place calle Blackwater National Wildlife Refuge in Cambridge, MD and word on the net is that Bald Eagels are plentiful there. We made the 2 hour drive, found the refuge and (I) spent a few hours snapping off frames. The results are amazing (Technologically speaking. There's no help for my technique).

I'll spare most of the boring details about shooting everything that moved over the weekend, and I'll jump to the part where I blew two really great shots, ok? Cool. I got kinda pissed when it happened, but since this is becoming a regular thing for me, I figured I may as well share.

The refuge is a driving loop of maybe 4 miles. So I would crawl through it in the car at about 15mph, peering into the trees, hoping to see an eagle close enough for my 200mm lens to capture (for reference, 400mm is usually considered the bare minimum for shooting birds, and I saw a couple 500mm and 600mm lenses with 2x extenders in use, so essentially the shooters were using 1000mm and 1200mm lenses). Anyway, on about my 20th loop Saturday, I come upon the eagle nest box just off the road and *finally* there's a friggin' eagle on it (the first 19 trips there was nuthin'). So I slowly stop the car, quietly open the door, remove my camera, remove my tripod, walk around to the back of the car, set down the tripod and look up to see the all-too-familiar scene of a bird's ass as he's flying off into the distance. Prick. So to continue the "imagination-photography" aspect of my blog: 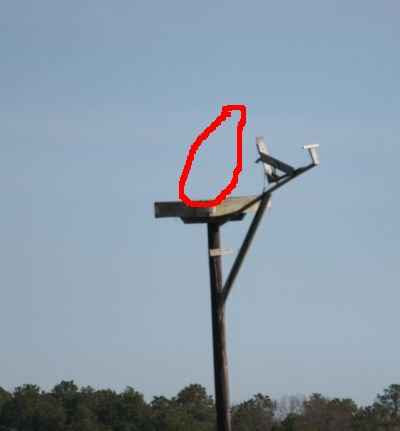 Annoying, right? Well, it gets better. So I'm doing my laps today. And I'm crawling along, peering off over the water looking for eagles in the solitary, tall, dead trees that they like. I decide to pull over and get out to to take a better look. I stop the car, open the door, and not 30' from me a *huge* eagle takes flight. He was in the tree just in front of where I stopped the car, and I was so busy looking out to my left, I never even saw him. Again, use your imagination: 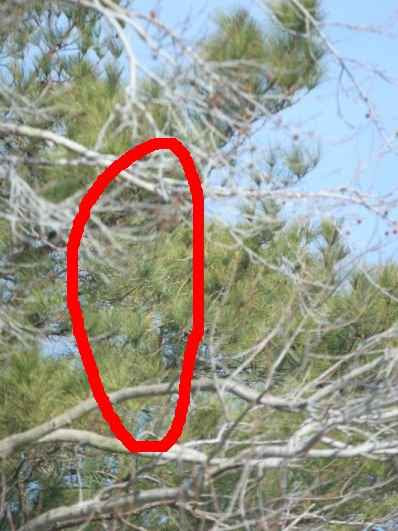 (Note: all imagination-photography pictures are to scale. Where the red circles are is the space that would have been taken up by the absentee bird(s)).

So I missed the big game-winning, frame-filling shot, but I did get almost 2GB of other shots. I'm going through them now and will probably post a bunch on my new pbase.com account. I figure I'll post the let's-all-laugh-at-gary's-missed-shots here on the blog, my favorite/artsy shots on eighteenpercent.net, and the stuff that falls somewhere in the middle on pbase.
Posted by gmr2048 at 8:06 PM