So Monday, I figured "if you can't go find wild animals in the wild to take photos of, go somewhere the poor bastards can't get away from you". So that's just what I did.

The girl and I spent the early part of the day at the National Zoo in DC, tho I'm not much a fan of large sized captive animals (they always look bored and sad to me). I had to do what I could to get some interesting pix, damnit. As a form of protest, we didn't spend any money there all day (and that had *nothing* to do with the $2.50 20oz bottled water, I swear).

I tried my hand at shooting photos of critters behind glass in the reptile house, but found that that was infinitely harder than expected. The shots came out like crap. I got maybe one good one out of 20.

Outside I did a bit better, tho on closer inspection at home later, I decided that I *really* need a better lens than my $129 70-300mm zoom.

Anyway, I was able to get a couple of ok shots of one of the pandas (which I'll post later) and the new cheetah cubs: 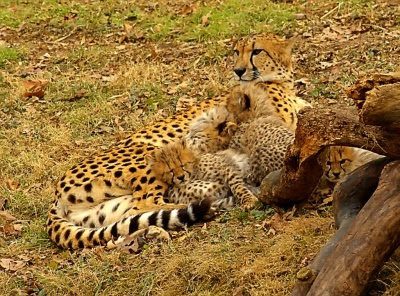 as well as some elephants and other random creatures. I'll post process and see what I have that's worth sharing either here, or on eighteenpercent.net.

For any other photographer types reading, I also learned that tripods are allowed in the zoo (at least the outside areas). I assumed they weren't, so I only took my monopod (which didn't help my images at all).
Posted by gmr2048 at 10:27 AM